The Sunday Salon: The Swimming Pool, parents and children

This week turned into one of those that sneaks up on you in its hecticness. I wasn’t thinking it would be that bad, but then suddenly you turn around and it’s Sunday. In my reading life this week, I finished The Swimming Pool by Holly LeCraw. In my other life, I watched my two nieces while my sister and brother-in-law were out of town. And I’m preparing for a vacation in Florida with my stepdaughter and husband. All these things have me thinking about parents and children.

The Swimming Pool is the story of two families who vacation together in the same spot on Cape Cod. Their lives become intertwined by an affair, a murder, another affair, some babysitting, a heart attack, an attempted suicide….it sounds like a lot, but much of it happened in the past. The novel goes back and forth between past events and present events, and so is really about how as Faulkner would say, the past isn’t dead,….etc. As I sit down to try and outline even the barest details of the plot, it becomes apparent how complicated it is and how difficult not to give away important details. I’ll just say there are two generations of parents. Marcella and Anthony are Toni’s parents, while Cecil and Betsy (both dead) are Callie and Jed’s parents. Then Callie has a little boy, Jamie, and a newborn, Grace. Things get more complicated from there. 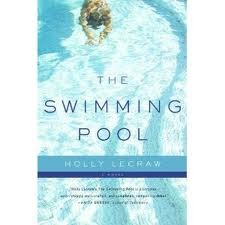 Callie and Jed’s parents are gone, and gone while they were still in college and under mysterious circumstances. A lot of the novel is about how Callie and Jed are still struggling with the loss of their parents, and how Callie is trying to figure out how to be a mother herself in the face of the loss of her own mother. I like the descriptions of Callie struggling to be a mother to Grace, her newborn. You might be inclined to think, well, she’s already a mother, what’s so hard? Or, Grace is her baby, biologically connected to her, why isn’t she feeling that connection? But parenting, it seems to me, is a complicated thing and I like that in this novel that isn’t taken for granted. You become a parent, and I don’t know if it’s ever past tense. I am done becoming a parent now, or are you always, in fact, becoming a parent as you negotiate the new curve that parenthood throws at you, every single day, it seems sometimes.

Marcella’s daughter, Toni, is in high school, and Marcella is still figuring out what it means to be her mother. It seems to me this never stops. And why should it? It’s one of the most complicated relationships we have. It makes sense that it’s always evolving.

So I very much liked this book as a kind of meditation about parenting, and part of this is the key absence of parents that lies at its core. What I think we parents have in our favor is the surprising, startling, sometimes overwhelming capacity for love on the part of children. I don’t know about you personally, but often as I’m going through my day-to-day life, I don’t think of myself as particularly lovable. Grumpy, prickly, difficult, moody. Lovable? I don’t know. And then this week my nieces got off the bus and came running up their yard full tilt for me standing in the door and almost knocked me over with their hugs. Where did that come from? I thought. Is that really for me? Me?

My stepdaughter left to go back to her mother’s at one point this week deeply pissed off at me for enforcing an early bedtime. I’m talking like a good 20 minutes on the phone with her mother (who luckily always defends parental rulings, regardless of which parent they’re coming from) explaining how wrong the early bedtime was. I’m talking ATTITUDE. Yes, that kind of attitude. And then when she came back, she was drawing a picture in her book of how she sees people. The picture of me? Standing on a stage in front of an audience playing my fiddle. “This is how I see you,” she says. “Talented.” Are you sure, I wanted to say? Are you thinking of the right person? Me? Really?

I’m a sociologist, so I don’t speculate a whole lot about human nature. But surely there’s a lesson to be learned from children’s capacity to love. They have lots of other capacities, too. For example, my two nieces are quite adept at picking at each other without ceasing. But I think sometimes of also taking care of each other, too. It’s a good thing to see yourself through children’s eyes sometimes. And perhaps even better to try and see other people as a child might. Talented. Huggable. Someone to love.

Leave a Reply to Deb Nance at Readerbuzz Cancel Reply